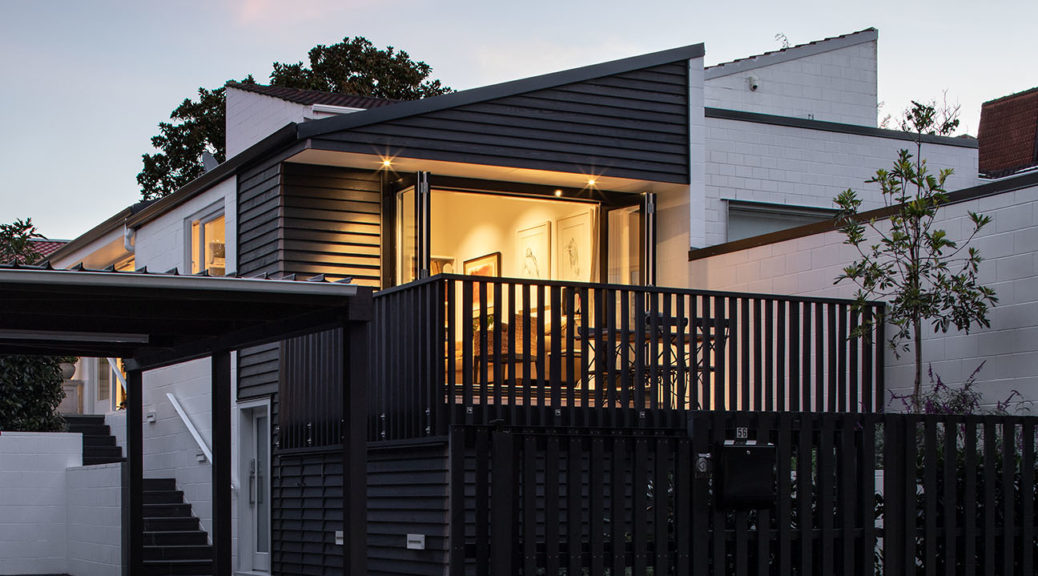 This 1970’s blockwork townhouse was an Auckland City development 50 years ago, when a large block of land was turned into multiple semi-detached terrace houses arranged around a shared park. The clients wanted to open it up their compact house to get more space, open plan living areas, and a connection from the back of the house all the way through to the street, where green from the park and mature streetside trees would add some nature back into their central city pad. The existing house was given a thorough re-plan and refurbishment, including the exterior blockwork, timber joinery and tile roof. The new extensions to the front and rear of the house used the house’s strong geometry to generate bold, contemporary architecture that complements the old house while adding an exciting new look to the precinct. 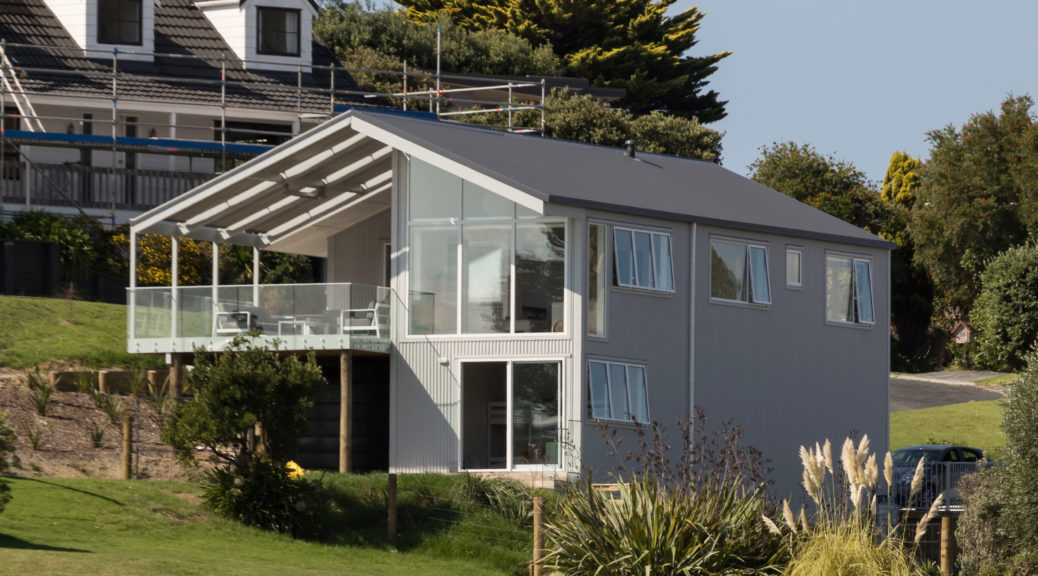 This beachside house was designed for family holidays where practical use of space and hardy materials were given equal weight to the site’s western sea views. The first floor was positioned at the same level of the neighbour’s roof ridgeline in front, so that there would be  unobstructed sea views from living areas and its generous deck. Bedrooms capture views east to the other side of the peninsula. The house uses a simple gable roof form that sits quietly in its suburban setting, while corrugated steel cladding and grooved plywood  interior linings were used for longevity and easy care. 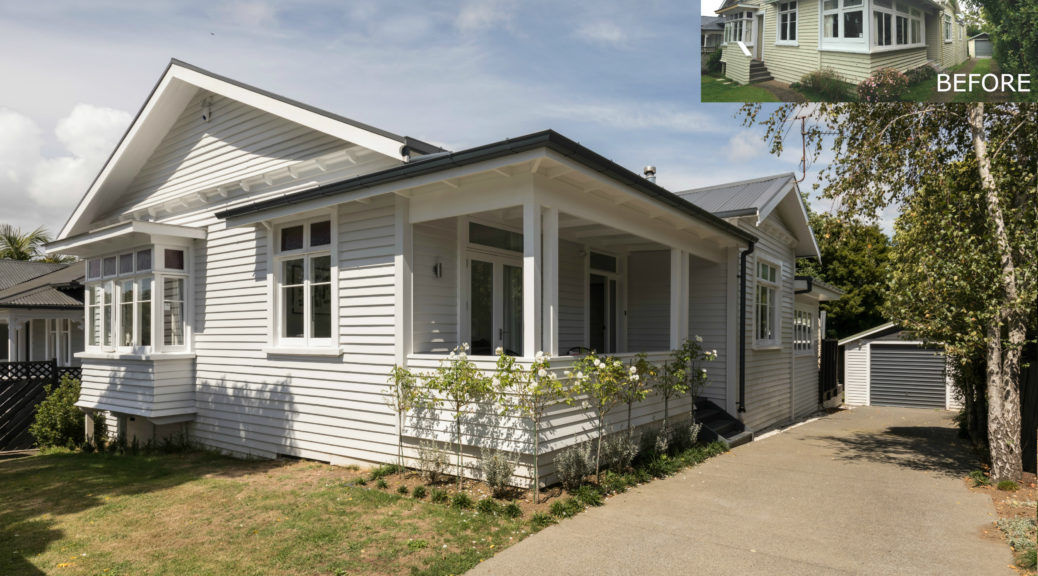 Having been divided into two flats, the clients wished to reinstate this old, gloomy bungalow to a family home and add a low key but contemporary addition that would include a new kitchen, dining room and living room. The old lean-to was demolished and the existing sunken garden was raised so that the new extension and decked terrace would connect seamlessly with a large new lawn. High ceilings, carefully placed windows and large sliding doors create light, space and flow to the outdoors. The restored bungalow houses bedrooms and new bathrooms, with careful reinstatement of its entrance porch, and typical bungalow features. 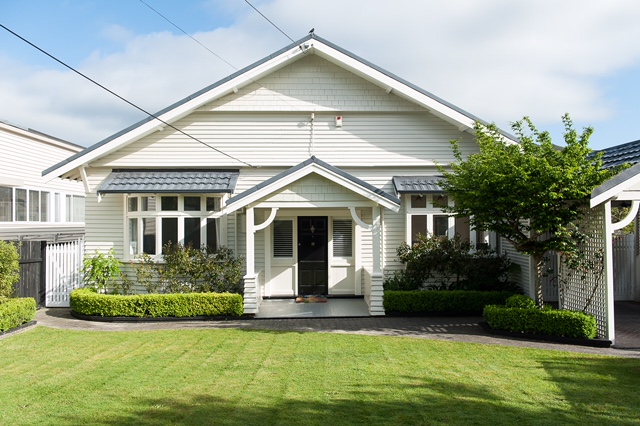 This Wellington bungalow was in need of some TLC, and contemporary architectural intervention. The rooms were kept generous in proportion, but the back of the house was opened up to create light, airy living areas, a large deck and great connection to the back garden. Classic bungalow details were celebrated throughout the house, and informed the restrained but modern extension. 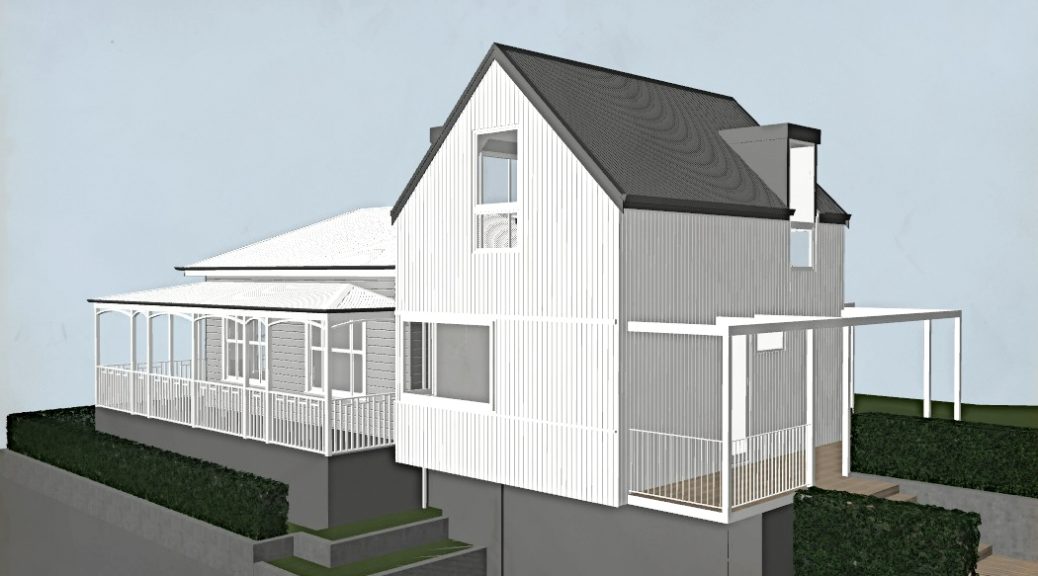 This old, dilapidated villa is being given a facelift and a contemporary extension, to create a four bedroom, two living area family home on a prominent St Mary’s Bay corner. The villa is a beautiful example of its type, so an extensive refurbishment of the villa, including a big new verandah wrapped around both sides, and a new, vertical weatherboard clad, pitch roofed rear extension will really bring it into the 21st century. The extension has been thoughtfully designed to complement the villa and surrounding streetscape while making a contemporary architectural statement. Views to the harbour bridge will be captured from the top floor. 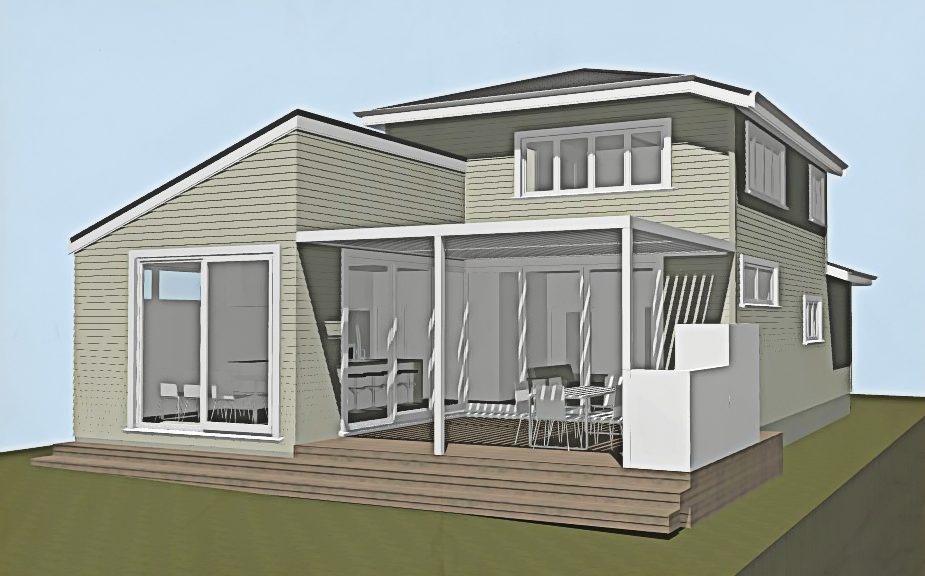 A tired, previously renovated weatherboard house needs a re-plan and new back barbeque terrace. Inside, a new kitchen, living room, dining area, study and bathroom make sense of the houses north-facing back garden. Outside, a drab deck is turned into a shaded, generous terrace with seamless flow to the kitchen and living areas. 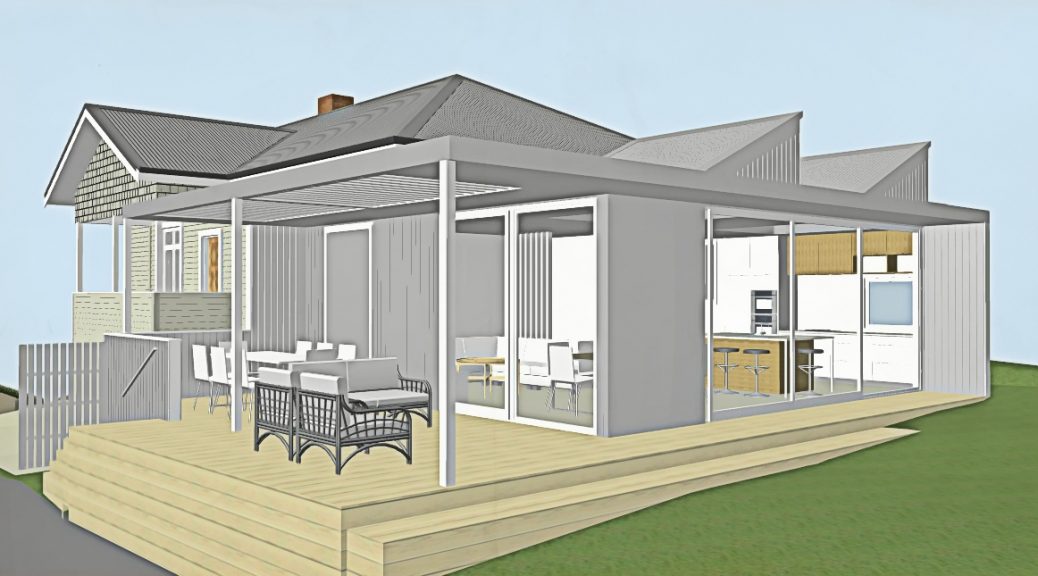 A contemporary, sophisticated addition is put on the back of this bungalow to add living areas, and the existing house is minorly replanned for an ensuite and walk-in wardrobe, second bathroom and a second living room. Vertical painted weatherboards contrast with existing horizontal bevel backed boards; pop-up roof lights allow east light into the new space. 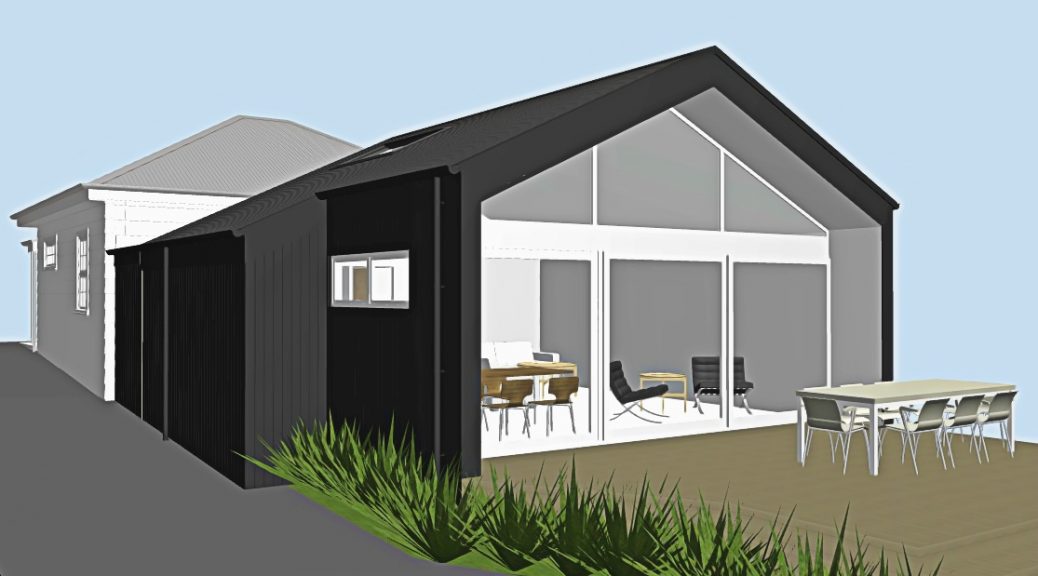 This addition to a traditional Onehunga villa includes s new living room areas, a kitchen, scullery and laundry. The gable from echos the roof pitch of the villa, but black cedar cladding and large north facing windows on the end give it a contemporary twist. 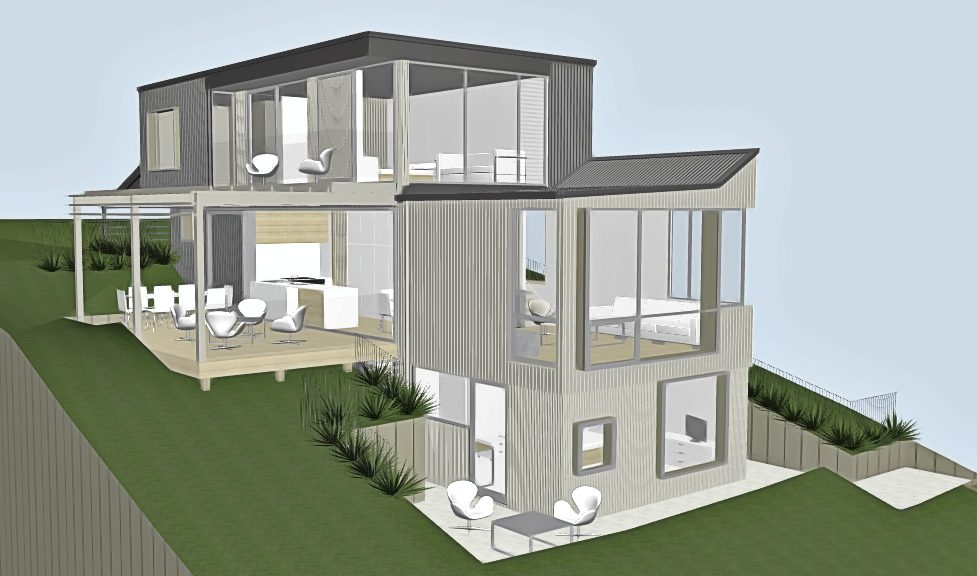 This house will sit on a stunning piece of land on Waiheke Island. The brief was for two dwellings: a main house at the top of the site, and another smaller visitor lodge at the bottom. Vertical cedar and long run metal cladding have been used to tie the houses to their bush setting, while window placement has been carefully controlled to make the most of views and sun. 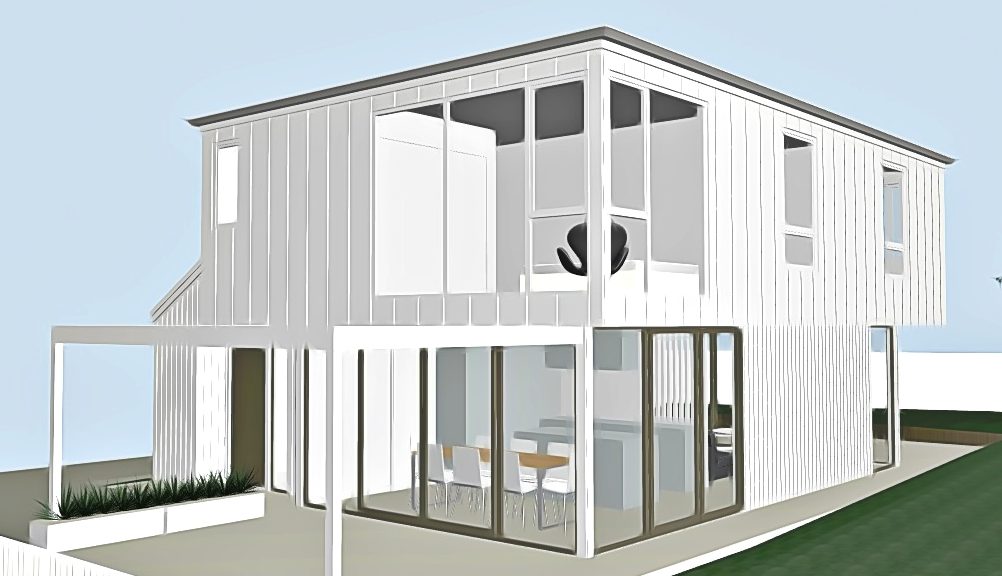 This house is being built on a small, subdivided piece of land in west Auckland. The design is simple and clean to ensure an efficient architecture that sticks to a budget. Sheet panel cladding is used with two groove centres, to add variety and texture to the facades. A small cantilever adds drama and shade to downstairs spaces.